The ladybird is under threat by one of its cousins, the Harlequin ladybird.  It has been in the British Isles since 2004, having arrived from Europe.  Its origin is from Asia where, around 1988, it was introduced to North America to control an aphid problem.  The species was more competitive than the native species and soon overwhelmed them. 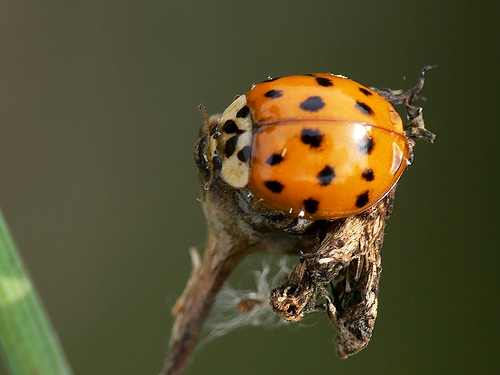 There are wide reports that many of the UK’s native ladybirds are in decline, as the Harlequin has cannibalistic traits, feasting on the smaller ladybirds as well as their food source.  The bigger 7 spot is said to not have been as greatly affected, but according to findings from the UK Ladybird Survey, whom I emailed and asked for some figures to justify these claims, most species are indeed in decline.  The results show that in a period of 5 years since the introduction of the Harlequin ladybird, a decrease in numbers of 44% was recorded in the 2 spot ladybird.  A map showing the spread of this invader can be found here, on the website.

The figures in the table below are from a survey conducted over the period of one year over 14,364 sites.  The first set of figures show the percentage of a particular species found over the total number of sites, and the second set show, by monitoring on a monthly basis, the percentage increase or decrease in that number by the end of that year.  The end of survey figures clearly indicate a dramatic rise in the number of invading Harlequin ladybirds.

The data collected only shows the increase or decline in numbers in sites where the Harlequin ladybird was found.